St. Augustine walks in the panoply of the greatest saints of the church. Saints like Thomas Aquinas, Benedict, and of course the Blessed Mother. His influence remains even 1600 years after his death and doesn’t seem to be waning in the least.

Aurelius Augustinus was born in Thagaste in AD 354. After a youth full of prolific puerile pursuits and almost two decades as a Manichean, he converted to Catholicism and was baptized by St. Ambrose in 387. His famous conversion story is retold in his Confessions. In 391, he was ordained a priest and by 396 was made bishop of Hippo Regius in modern day Algeria. By the time of the barbarian invasions into north Africa, Augustine had been bishop for over 30 years. The man never stopped throughout his life. He is the definition of activity and of utter and total devotion to Christ. He died as Hippo was being burned to the ground by the barbarians in AD 430.

Augustine’s person and personality are evident throughout his works and his insights into the human person and society are nothing else than piercing and prescient. Here are 12 (though not the only) Reasons You Should Study St. Augustine.

This heart is on fire!

1. He was a prolific writer

City of God, anyone? How about the hundreds of letters that he wrote to practically anyone who wrote to him? His sermons? No. How about his Retractions? Anyone who wants to hone their writing skills needs to spend time with the writings of St. Augustine.

2. He has one of the best conversion stories

Anyone who loves conversion stories should be familiar with the conversion of St. Augustine. Conversion is a process and Augustine knew that. You have the “big” moment, but every day after that is an opportunity to turn towards the Lord in the heart. A constant metanoia, if you will. As he said, “Our hearts are restless til they rest in You.” This conversion story is timeless and obviously one for the ages. “Tolle lege, tolle lege!” Can’t get any better than that.

Augustine’s relationship with his mother is no secret. He was a momma’s boy in every sense of the word. Monnica was tireless in her efforts to help effect her son’s conversion. She was ultimately rewarded before her death in seeing her son return to the flock of the Lord. Anyone who needs encouragement to continue praying for a specific intention should take Monnica as an example for her perseverance in prayer. Augustine relates in book 6, ch. 1 of the Confessions, “[S]he was fully confident that Thou, who had promised the whole, would give the rest, most calmly, and with a breast full of confidence, she replied to me, ‘she believe in Christ, that before she departed this life, she would see me a Catholic believer.'” What a woman!

He also loved the Mother of the Lord, of course.

4. He was a master rhetorician and teacher

Trained over the course of many years, Augustine mastered his craft as a man of letters and speech. These tools he would use as a priest and ultimately as a bishop and writer to great effect. They would most effectively be used against the Donatists and their heretical movement.

See picture at the head of this article. He is known to have said, “The beard signifies the courageous; the beard distinguishes the grown men, the earnest, the active, the vigorous. So that when we describe such, we say, he is a bearded man.”

6. His sense of wonder

If anything, Augustine was a curious man. His curiosity ultimately drove him to embrace the fullness of Truth in all its wonderment. He never lost his sense of wonder of all of God’s creation, including the wonder that is man, throughout his life. “Men go abroad to wonder at the heights of mountains, at the huge waves of the sea, at the long courses of the rivers, at the vast compass of the ocean, at the circular motions of the stars, and they pass by themselves without wondering.”

He was also in wonder at Ambrose’s ability to read silently to himself. “But while reading, his eyes glanced over the pages, and his heart searched out the sense, but his voice and tongue were silent.” (Confessions – bk. 6, ch. 3) He would often just sit there and watch Ambrose read, so impressed he was.

7. He was a borderline genius

The dude knew his stuff. He could not have achieved all that he achieved without his God-given intelligence. The connections and insights he was able to make were a result of his learning, but most importantly his prayer and connection to God.

8. He started his own monastic order

De opere monachorum detailed how the men who chose to follow him would live. After his conversion, he desired to live the life of a monk and first created a group with his friends. Later he was able to collect a group of men around him to live out the monastic ideal while he was a bishop. Religious vows were not taken and private property was not permitted.

I confess, I have an itch on my shoulder.

9. He was a dedicated and long-lasting friend to others

“The death of his close friend in Thagaste in the year 376 was significant in that it made Augustine realize that life is temporal. Looking back reflectively on his life in his Confessions, Augustine wrote that the death of this closest and dearest friend had positively influenced his own process of conversion to the Christian faith. Augustine discovered how deep the bond of friendship ran very deeply within him when he lost this un-named dear friend. He later wrote, ‘For I thought that my soul and his were but one soul in two bodies.’ (Confessions 4, 6, 11). For Augustine the mystical ‘bond of love’ that thoroughly binds community members together is the work of the Holy Spirit. As reported in the Confessions, Augustine and this unnamed friend had known each other for a short time when his friend died, yet Augustine felt that he was losing someone he had known all his life. ‘You [God] took the man from this life when our friendship had scarcely completed a year. It had been sweet to me beyond all sweetnesses of life that I had experienced.'” – (https://augnet.org/default.asp?ipageid=163)

His best friend, Alypius, accompanied him on his conversion and was part of Augustine’s life until his own death. Alypius’s death also deeply affected Augustine.

10. He still effects people 1600 years after his death

No matter where you are at in your own life and what your own history is, Augustine will effect you in some way or another. Even a few moments with his words will change you at your core. This man is a saint for a reason. Seriously, check out his writings: Confessions or City of God are good places to start.

You cannot be a rhetorician or teacher without being a skilled orator. As a bishop, he was expected to give sermons and homilies against the unruliness of the congregation in his cathedral. Mass was a loud affair back in the day, so his speaking skills must have been exceptional.

12. He was a faithful son, priest, bishop and servant of Holy Mother Church

Augustine wrote sermons, treatises, books, letters, etc. on all kinds of Catholic beliefs throughout his life. A simple look at his works attest to this fact. He is also famously known to have said, “For my part, I should not believe the gospel except as moved by the authority of the Catholic Church.” (Against the Fundamental Epistle of Manichaeus).

St. Augustine was a faithful and committed Catholic through and through. In fact, many of his writings give clarity to the long-held and ancient beliefs that Catholics have believed from the Resurrection onwards. 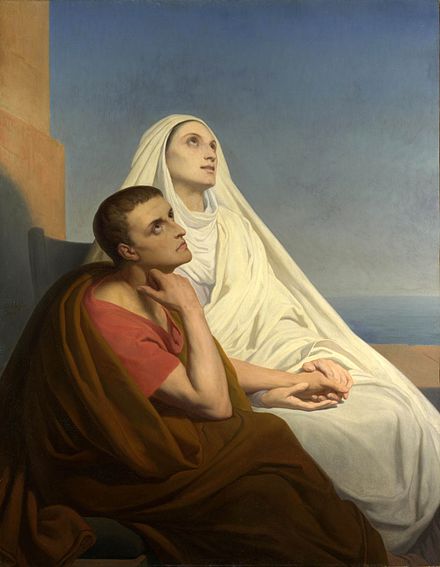 Mom, why are we staring at the sky?