25 Women Saints Who Prove Every Day is Women’s Day

While the world may celebrate International Women’s Day on March 8th every year, these saints prove that the Catholic Church celebrates women’s day every day of the year.  Check out these women and how they impacted the Church! 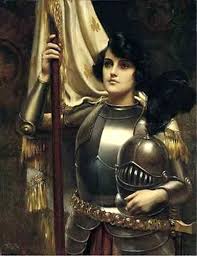 The “Maid of Orleans,” Joan of Arc led the French army in a war against the British in 1412.  She was only 18 years old and regularly conversed with other women saints including St. Catherine of Sienna.

Set to be canonized this year, Blessed Mother Teresa devoted her life to serving the poorest and most rejected in the streets of India.  She founded the Missionaries of Charity, an order which continues her work throughout the world.  She won the Nobel Peace Prize, which referred to her as the Saint in the Gutter.

An American missionary, Saint Katherine Drexel devoted her life to the education of African-Americans and Native Americans.  She founded the Sisters of the Blessed Sacrament, and invested her entire inheritance  $20 million dollars into her missionary work in the United States.

Mary of Egypt became a prostitute at the age of 12, and devoted her life of promiscuity to “anti-pilgrimages,” where she made it her goal to lure holy men away from the path and into a life of sin.  She encountered an icon of the Blessed Virgin Mary at the Church of the Holy Sepulcher and spent the rest of her life living in the forest, doing penance for her past sin.

Although she was confident God was calling her to religious life, Saint Zelie Martin quickly found God’s plans were far above hers.  She married her husband, Saint Louis Martin and together they had nine children, five of whom survived infancy.  The five surviving girls all became religious sisters, one of whom was…

Saint Therese entered the Carmelite convent at age 15.  Although she died at age 24 and never left the walls of the convent, Therese devoted her life to the “Little Way” which gave opportunities to turn every action into a prayer.  Her fame as a saint and intercessor resulted in her patronage of missionaries. Despite never attending a lavish University or receiving a formal education, she is a Doctor of the Church.

Proposed to at the young age of 10 years old, Saint Gertrude declared she would marry no man because her groom was Christ.  Her father shaved her hair in a tonsure to assure that no man would attempt to take her as his wife.  She later became an abbess and is known as the patron saint of cats.

Dominican, Philosopher and Theologian, Saint Catherine of Sienna is a Doctor of the Church.  Saint Pope John Paul II named her one of the six patron saints of Europe, and along with Saint Francis of Assisi, she is one of the two patron saints of Italy.

A domestic servant at the age of 12, Saint Zita made daily morning mass a priority, rushing home to bake the bread for the Fatinelli household where she was employed.  One day when Mass ran late, she came back into the kitchen expecting a scolding because the bread was not ready, but instead found that the angels had came and made the bread for her.

After the death of her mother, Saint Dymphna’s father became mentally ill.  Despite his daughter’s vow to remain a bride only for Christ, he planned her engagement to a man.  She fled her home, but was apprehended and murdered by her father when she was only 15 years old.

Saint Elizabeth of Hungary was married at a young age to a holy man and together they had three children. After the sudden death of her husband, Saint Elizabeth arranged for the well-being of her children, denounced the world and became a Franciscan.  She worked with the poor and starving of her city until her death at the young age of 24.

Saint Kateri Tekawitha is the first Native American to be canonized by the Catholic Church.  She converted to Christianity as a Mohawk Indian and practiced forms of self-mortification.  She died at the young age of 24.

Saint Elizabeth Ann Seton was the first American-Born saint to be canonized.  She married the love of her life, William Seton, but he died quickly, leaving Elizabeth with their children during their trip to Italy.  She converted to Catholicism after conversations with Italian friends, and moved back to the United States, where she began founding and teaching in free Catholic schools for girls.

Saint Brigid was known for her incredible generosity.  On many occasions, she was scolded for giving away food and money to the poor of the surrounding area.  She even gave away her father’s prized jeweled sword to a visiting beggar so that he could provide food for his family.  She prayed to be made ugly so that no man would desire to marry her, and the prayer was granted.  Her beauty was restored after she professed her final vows as a religious sister.

Saint Faustina was born in Poland in 1905.  In the 1930s, as a Sister of Our Lady of Mercy, Faustina was called by God to be his missionary of mercy throughout the world.  She suffered from tuberculosis silently, and upon her death her fellow sisters commented on how, despite the incredible pain, Faustina was always filled with joy and contentment.

Edith Stein was a German Jewish Philosopher who converted to the Roman Catholic Church.  She wrote extensively on the role of women and feminism in the life of the Church.  Edith rejected the grandeur and prestige of the title of a college professor and entered the Carmelite convent. She was killed in the Nazi invasion and suffered martyrdom in a concentration camp. 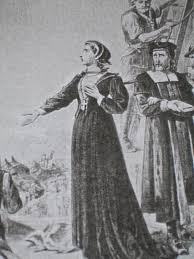 Margaret was born in England in 1555.  She was a protestant, but converted to Catholicism after marrying John Clitherow, with whom she had two children.  Her bravery inspired her to harbor priests during the Catholic persecution in England.  However, she was discovered and condemned to death.  Her martyrdom consisted of “Pressing,” where she was laid in a hole and crushed under a door loaded with weights – a process that took over 15 minutes as her bones were slowly broken.

Frances’s father promised her in marriage, despite her desire to enter into the religious life.  Torn, she spoke to her spiritual director who asked her: “Are you crying because you want to do God’s will or because you want God to do your will?” She agreed to the marriage at age 13, but spent the first 6 months close to death due to stress and strain from life as a noble woman at such a young age.  She discovered her sister-in-law had desired to enter the religious life as well, so both women devoted their lives to gathering food for Rome’s poor.  She nursed people during their dying moments, and was her husband’s nurse as he lay dying.

Cecilia was given in marriage to a pagan man.  She begged her guardian angel to help guard her virginity, which she had vowed to Christ.  When the time for their marriage consummation came, her husband asked for proof that Cecilia had taken a vow of chastity.  She asked him to make a pilgrimage and convert.  He did, and upon his baptism he was able to see Cecilia’s angel by her side.  Shortly after, they both were martyred for their faith in Rome. 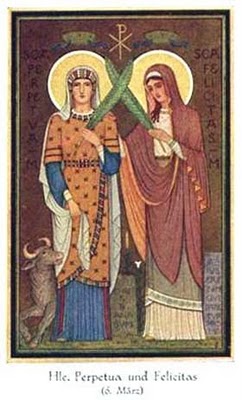 A highly educated woman, Perpetua converted to Christianity despite the pleadings of her Father to remain a pagan.  She had just given birth to a young son, who was still nursing at the time of her arrest by the Roman emperor.  She was imprisoned with fellow Christians, including Felicity, a slave who was pregnant at the time of her imprisonment.  Both women were attacked by a wild heifer, but they entered into Heaven when their throats were slit.

Agatha refused a man who made sexual advances to her.  The man became angry, and turned Agatha into the authorities for being a Christian.  She was sent into a brothel, where she suffered for a month.  After the ordeal, she was brought back into the courts and sentenced to prison and torture, where her breasts were removed.  She died a martyrs death in the sixth century.

Saint Bernadette was the oldest of nine children, She suffered from extreme asthma and struggled with health issues her entire life.  While gathering firewood with her sister and friend, Bernadette encountered the Virgin Mary in the grotto at Massabielle.  The Virgin Mother, who revealed herself as the “Immaculate Conception” would visit Bernadette sixteen times.  Lourdes became a miracouls site visited to this day.  When asked if she struggled with pride after speaking with the Mother of God, Bernadetter replied: “The Blessed Virgin chose me only because I was the most ignorant.”

Saint Maria Goretti helped raise her siblings and take care of the family farm alongside her mother after the sudden death of her father.  When she was a young teenager, an 18 year old farm hand named Alessandro approached her and attempted to rape her.  She refused, and he retaliated by stabbing her 14 times.  She was brought to the hospital, where she underwent surgery without any anesthesia.  She passed away after forgiving her murderer.

Saint Monica is best known for her role as Saint Augustine’s mother.  She played a large role in the conversion of her husband, and two of her three sons entered the religious life shortly after their father’s death.  Augustine, however, plunged into immorality.  Monica continued to pray for his conversion for the next 17 years.  Eventually, Augustine converted and became a Doctor of the Church.

Queen of the angels and saints, sinless virgin, Mother of God and Mother of us all.

All you holy women pray for us!