Do You Know Your Liturgical Colors?

Pope Innocent III (1198-1216) was the first person to institute a specific liturgical color scheme. He named four colors: white, red, black and green to be used during the Church year. Today the Church recognizes six liturgical colors – rose and violet/purple were added in 1570 with the promulgation of the Roman Missal following the Council of Trent. (Some countries of Spanish heritage – Spain, Mexico – have been given permission to use blue in their celebrations of Marian feasts.)

So why do we use use different colors? It connects us visually to particular Church seasons. It reminds us that change is a constant of our lives and the Church.

Symbolizes purity, joy, light, glory. Used during Christmas and Easter as well as Holy Thursday, the solemnity of the Most Holy Trinity, various feasts of Christ, the Virgin Mary, angel and saints who are not martyrs. Also on the feasts of All Saints, John the Baptist, St. John the Evangelist, the Chair of St. Peter and the Conversion of St. Paul. White is also used for marriages and baptisms, parish feast days and Thanksgiving Day in the United States. It is also often used for funeral masses since Vatican II to remind us of the Resurrection.

Symbolizes hope, life, anticipation. Green is used during Ordinary time, the longest season of the Church year. Ordinary time focuses on Christ’s public ministry, His teachings and miracles. We are reminded during this season that we are a Missionary Church – we are to share the Christ’s message with the world.

Symbolizes blood, fire, passion. Red is used on Palm Sunday, Good Friday, the celebration of the Lord’s passion, the birthday feast days of the apostles and evangelists and the celebrations of martyred saints and Pentecost Sunday. Red symbolizes the Holy Spirit. You will also see red during confirmations.

Symbolizes death and mourning. This color is not often used in the United States as white is now the preferred color for funeral masses. However, you may see it during some funeral masses and on the anniversaries of deaths.

Symbolizes penance, preparation, sacrifice. You will see these colors most often during Lent and Advent and sometimes at funerals. Purple originally was the color of royalty as it was an expensive dye.
Rose: Symbolizes anticipation, rejoicing. It is used on Gaudete Sunday (the third Sunday of Advent) and Laetare Sunday (the fourth Sunday of Lent). The words “gaudete” and “laetare” are variations of the Latin word meaning “rejoice”. They are a reminder of upcoming joyful events.

The liturgical colors of the Church can be seen in the vestments of the priests, the drapings in the Church and sometimes the veil over the chalice. Advent candles are purple with one rose candle for the third Sunday in Advent.

Visit the USCCB’s page for the liturgical calendar

Catholic.org has a wonderful color guide 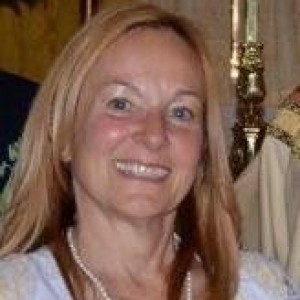 Judith Babarsky wants to live in a world where everyone gets along with everyone else and no one takes themselves too seriously. As a Licensed Professional Counselor in Private Practice for the past 20+ years, she has seen many different sides of human nature, learning that all people need validation and most people do their best to be good in spite of mishaps along the way. A convert to Catholicism, she earned an MA in Theology from Holy Apostles College and Seminary and now serves as Adjunct Professor of Theology/Bioethics. Judy and her husband have 5 children and two Rat Terriers. When she's not counseling or teaching she enjoys playing with her grand-daughter, traveling, good food and craft beer. She recently began a personal blog at www.judithbabarsky.com that is a work in progress.