Most people view Halloween as a time of gory, villainous characters, maybe even of the demonic. But nobody has anything on Catholic saints. Here are twelve martyrs that received some of the most gruesome deaths imaginable.

The first martyr, Stephen was stoned to death for his faith and died echoing the words of Christ on the cross, “Lord Jesus, receive my spirit. Lord, do not hold this sin against them.”

Often depicted as being shot with arrows, this wasn’t the action that actually killed him. After being shot with arrows, Sebastian was left for dead. He was found by Irene of Rome who nursed him back to health. Sebastian then went in search of Diocletian and loudly denounced him. Diocletian had him clubbed to death (this time it worked) and then thrown in the sewers under Rome.

Lawrence was roasted to death and famously said, “Turn me over! I’m done on this side!” The reason he was martyred is because when he was ordered to bring the Church’s treasure to the Prefect of Rome, he brought all of the sick and poor people, which enraged the prefect. A good reminder for all of us!

Margaret was imprisoned for harboring priests and having mass said secretly in her home. When she wouldn’t renounce her faith, she was pressed to death. This meant she was stretched out on a sharp rock and pressed with a door that had heavy weights on it until she died.

Cassian was a teacher in 363 and refused to make sacrifices to the pagan gods and so was sentenced to death. His students were invited to hack him to death but, they only had small, non-lethal objects to do so with, like their tables and writing styluses. This made Cassian’s death even more torturous.

Bartholomew was one of the Twelve Apostles and was a missionary in what is now Iran, Turkey, Armenia, Ethiopia, and Mesopotamia. After the brother of the king of Armenia converted, the king called for Bartholomew’s death. That death was by being flayed, which means his skin was totally removed from his body in strips. He was also beheaded, for good measure.

Antipas was burned to death by being roasted inside a brazen bull. This was a method of torture devised in Sicily where a person would be placed inside a hollow bronze bull which would then be set over a fire. What a terrible way to go!

Because Eulalia was thirteen when she refused to renounce her faith, she was put through thirteen tortures to kill her. These included: being put into a barrel with knives or glass and rolled down the street (this is referred to as Eulalia’s Descent), having her breasts cut off, being crucified upside down on an X-shaped cross, and, what finally killed her, being decapitated. There is a legend that a dove flew out of her neck when she was decapitated.

Euphemia was imprisoned for refusing to take part in a pagan sacrifice. She was tortured for days – and even put on a breaking wheel. She was then fed to the lions but, instead, the lions licked her wounds. Finally, the emperor let loose ravenous bears to eat her, which was the cause of her demise.

Romanus was to be burned at the stake for his faith, but rain kept putting out the flames. So then his tongue was cut out, because he was an excellent preacher. Then he was strangled, but he was able to continue preaching anyway! Finally, the governor had him beheaded. 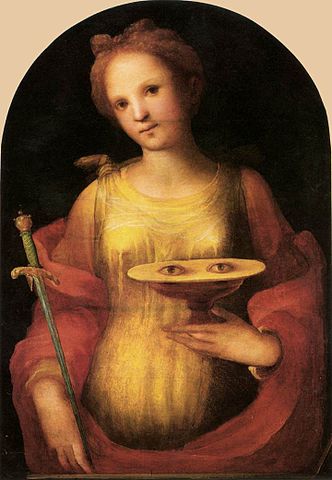 Ever wonder why Lucy is sometimes depicted holding her eyes on a platter? Legend says that, as part of her torture, her eyes were gouged out. Another legend says that Lucy gouged out her eyes herself to discourage suitors, since she had pledged herself to God.

Castulus brought many converts to Pope St. Caius to be baptized, which angered Emperor Diocletian. After a couple rounds of torture, Castulus was killed by being buried alive in a pit of sand outside the city.

"I have become all things to all, to save at least some" (1 Cor. 9:22) basically describes her life as writer, homemaker, friend and sister, wife, and mother of 3 spunky children, all for the sake of Gospel joy. She received her BA in Theology, Catechetics/Youth Ministry, and English Writing from Franciscan University of Steubenvile. Her life mottos are Ad Majoram Dei Gloriam and "Without complaint, everything shall I suffer for in the love of God, nothing have I to fear" (St. Teresa Margaret of the Sacred Heart). She is Pennsylvanian by birth, Californian by heart, and in Colorado for the time being. She blogs at www.PrincipessaMeetsWorld.com and yinz can find her on Twitter @TheresaZoe.