Saints Who Honorably Served In Their Military

We are at war. Make no mistake about it. We are the Church Militant after all.

Though we are in battle with all the powers and dominions and principalities, we already know the outcome of the war. Christus vincit! Christus regnat! Christus imperat! That should give us great comfort, but fight on we must.

In honor of Veterans’ Day and the brave men and women who serve our country, I thought I would share a few stories about military saints. I’ve already shared about the Theban Legion. On this Veteran’s Day, thank a veteran and tell them how much we appreciate them. May God Bless them and may God Bless America!

St. George was born around 275-280 in Lydda, Syria Palaestina. He was of Greek origin and it seems his parents were Christians. George became a Roman soldier and an officer in the guard of the emperor Diocletian. He was condemned to death by the emperor for not recanting his Catholic faith. He was martyred on April 23, 303 in Nicomedia in Bithynia. He is usually portrayed as a crusader slaying a dragon (i.e. – the Devil). Feast day is April 23.

St. Theodore of Amasea was martyred in the year 306. Not much is known of his life. It is said he was a recruit of the Roman army. He refused to join in pagan worship with the other recruits and was arrested. However, perhaps because of his young age, Theodore was let off with a warning. He subsequently set fire to the temple of Cybele in protest of pagan worship. He was arrested, condemned to death, tortured, and finally thrown into a furnace. Feast day is November 9.

St. Demetrios was born in 270. He was born to pious Christian parents, often thought to be of a senatorial rank. He and his family were run through with spears in about 306 during Christian persecutions. He was said to have defended the city of Thessaloniki after his martyrdom through miraculous intervention. This caused him to be depicted as a Roman soldier in later icons. He is patron saint of the city and closely associated with the Crusades. Feast day is April 9.

St. Theodore came from Asia Minor and is venerated as a warrior saint. Legend has it he killed a serpent with a sword outside of a town called Euchaita. Because of this episode, he was appointed military commander in Heraclea Pontica. However, this was during a persecution. Theodore invited emperor Licinius to the city. He gathered all the silver and gold statues at his house and smashed them, distributing the pieces to the poor. He was subsequently arrested, tortured, and crucified. Miraculously, he was found the next day unharmed and alive. Martyrdom did not scare him so he volunteered to be handed over to Licinius once more. He was finally beheaded. Feast day is February 8.

[no known pictures of the archangel exist]

St. Michael the Archangel thrust Satan into hell after he chose not to serve God. He also defeats the Devil again in the book of Revelation. He is the protector of the Catholic Church, Guardian of the Vatican, and protector of the Jewish people. His four main responsibilities are: to combat Satan, to escort the faithful to heaven at their hour of death, to be champion of all Christians and the Church, to call men from their lives on earth to their heavenly judgment. Feast day is September 29.

Father Kapaun was born in Pilsen, Kansas and died in Pyoktong, North Korea as a P.O.W. on May 23, 1951 during the Korean War. He was an army captain and chaplain and also fought during the Second World War. During his time in Korea, he administered the sacraments wherever and whenever they were needed even using the hood of a jeep as a makeshift altar. John Paul II declared him “Servant of God” in 1993 for his heroic virtue and his cause for canonization has been opened. After succumbing to a blood clot, dysentery, and pneumonia he died. He is buried in a mass grave near the Yalu River.

St. Maximilian was born in about 274. He was a berber and son of a Roman soldier. He was obliged to enlist in the army himself and was brought before the proconsul, Cassius Dio. He refused to swear allegiance to the emperor because of his Christian faith and stating he could not serve in the military. He was immediately beheaded. He is known as the patron of conscientious objectors and a group of anti-Vietnam war clergy members named themselves the Order of Maximilian in honor of him. Feast day is March 12.

St. Victor the Moor, or Victor Maurus, was born sometime in the 3rd century in Mauretania. He was born into a Christian family and joined the Roman Praetorian Guard. After he destroyed some pagan altars, he was captured, tortured and martyred in 303. He is buried in Milan. Feast day is May 8.

St. Florian was born in what is present day Austria in the Roman Empire in about the year 250. He joined the army and advanced quickly achieving the rank of commander of the imperial army in Noricum. He also was in charge of the firefighting brigades. He did not enforce proscriptions against Christians and was investigated by the government. Refusing to offer sacrifice to the gods, he was sentenced to burn at the stake. Challenging the soldiers to ignite the pyre, he said, “If you do, I will climb to heaven on the flames.” He was instead drowned in the Enns River in about 304. His body was retrieved and is now in an Augustinian abbey near Linz. Feast day is May 4. 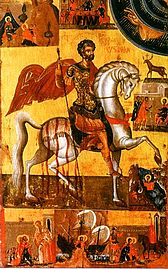 St. Typasius died on January 11, 304. He was a veteran of Tigava in Mauretania Caesariensis. Refusing to participate in quelling a revolt having become a Christian, he retired. He built a monastery for himself but was called back into active service and asked to sacrifice to the pagan gods. He refused to do both and was taken into custody. Claudius, the comes in charge, had a seizure, from which Typasius cured him. Reluctantly, Claudius read the death sentence and Typasius was beheaded. Feast day is January 11.

Matt Vander Vennet currently resides somewhere in central Illinois. Matt is a teaching fellow and doctoral candidate studying Church History at the Catholic University of America and is the advancement director for a local Catholic high school. Matt holds an M.A. from Holy Apostles College & Seminary and an M.Phil from CUA. Matt is married to a beautiful redhead named Liz and loves being daddy to their young daughter and son! He loves a good brew (NO IPAs!), the Green Bay Packers, & also plays guitar. Feel free to check out www.mattvandervennet.bandcamp.com.