1. Do it. Even if it seems ridiculous

Known for the quote, “Unless you are willing to do the ridiculous, God will not do the miraculous. When you have God, you don’t have to know everything about it; you just do it,” Mother Angelica often appeared to be “doing the ridiculous.” As a cloistered sister who revolutionized the Christian broadcasting industry and starred in her own TV program, Mother Angelica seemed like a walking contradiction! Whether she was ordering a giant satellite on faith and no credit, standing up to wishy-washy clergy, or publicly clashing with dissident Bishops (and putting their television broadcasting service out of business), she went where God led even when it seemed crazy, and we are so glad that she did!

2. Act and then expect God to act.

Raymond Arroyo, who wrote the definitive biography on Mother Angelica’s life tells a story that encapsulates Mother’s faith and her determination to act and then wait for God to act. It involves a giant satellite being ordered and delivered when Mother Angelica had only $200 in the bank all because she firmly believed God wanted EWTN to happen. So she acted. And the satellite, costing $1.5 million, was delivered to the middle of nowhere Alabama. Since it is too remarkable to paraphrase, here is Raymond’s retelling:

She goes out to greet the delivery man, and she’s stalling–she’s taking the guy on a tour of the monastery, she’s handing out cookies, anything to keep him from asking for the money. Finally, he asks for the $600,000 [delivery down payment] and she says–”Let me go pray for a minute, I’ll be right back.” She goes into the chapel and she kneels down and as spouses are wont to do, she kind of tried to make her spouse feel guilty. She says, “I thought you wanted this satellite Lord and I wheeled and dealed and I got it for you and now I’m having a little problem, we need this money or I’m going to have to turn your satellite away.”
And she kind of waits for the money to fall from the ceiling and it doesn’t, so she decides to get up and turn the delivery truck away. And as she walks out, one of the sisters comes running out of the monastery and says, “Mother, there is a man on the phone and he’s very insistent, he needs to talk to you and he won’t get off the line.” She said, “But, I got big business out here, Sister.” She says, “I know, but he’s very insistent.” So she says, “Oh, give me the phone.” So she talks to this guy. It’s a businessman calling from his yacht in the Bahamas. He read one of her little spiritual books she had written, a little mini book, tracts on the spiritual life, years before. He’s calling because this book changed his life, helped him reconcile with his family and he’s calling to make a donation to her book ministry, a donation of $600,000. She says, “Can you send it right now?”
He wired the funds in. That was the down payment for the satellite that to this day continues to beam EWTN all over the country. I saw the transfer papers. I didn’t believe the story myself. I pulled the records and there it was. Pretty astounding stuff. Her story is replete with things like this.

Before EWTN was an entity, Mother Angelica had the idea to broadcast a Catholic TV show. A cross between Masterpiece Theater and a Bible study, complete with a fake fireplace and faux leather chair, Mother Angelica used her wit, charm, and keen insight to evangelize. But it all started with one poorly lit, amateur video tape that was filmed on a set and sent to different broadcast companies! It was eventually picked up by CBN who was so impressed they asked for 60 episodes in two months! According to her biography:

“Sixty episodes?” Angelica shouted into the phone. As she spoke, images of falling props, hasty exits, and inadvertently removed microphones flickered in her memory. “If that’s what you need, that’s what we’ll do,” she promised [CBN], defying her doubts.

Arroyo, Raymond. Mother Angelica: The Remarkable Story of a Nun, Her Nerve, and a Network of Miracles (pp. 141-142). The Crown Publishing Group. Kindle Edition.

Mother Angelica was known to say,

“Never put a lid on God. You can give God a thimble and ask for a quart. It won’t work. Your plans, your projects, your dreams have to always be bigger than you, so God has room to operate. I want you to get good ideas, crazy ideas, extravagant ideas. Nothing is too much for The Lord to do – accent on ‘The Lord’.”

Everything she accomplished she did for God, and she didn’t box Him in. Instead, she dreamed big with Him and then let Him show off!

5. Don’t take yourself too seriously

One of the most endearing qualities Mother Angelica possessed was her ability to not take herself too seriously. She was the first to admit what she didn’t know, what she couldn’t do, and what her limitations were, but she never let it stop her. Her secret was while she may not have taken herself too seriously, she took God seriously, and that made up for everything she lacked. Mother Angelica was known to poke fun at herself and even at her poor health, which was a cross she carried for most of her life. This off-the-cuff style and no-frills attitude steeped in humility (how many women do you know who would go live on national TV wearing an eye patch?) spoke directly to the hearts of millions. Mother Angelica’s example teaches us that when we don’t take ourselves too seriously, God gets the glory.

6. Above all else, be faithful not afraid

According to Mother Angelica, “Faith is one foot on the ground, one foot in the air, and a queasy feeling in the stomach.” And the most important thing to her was not how big her television reach was, not how many programs EWTN was airing, and not how much money the station was able to bring in to keep operating. To her, “the only thing that is important is, am I loving God and growing holy every day?”

May we all follow her advice and learn how to live life “one foot on the ground, one foot in the air, with a queasy feeling in our stomachs as we are about to do something “ridiculous” for love of God! 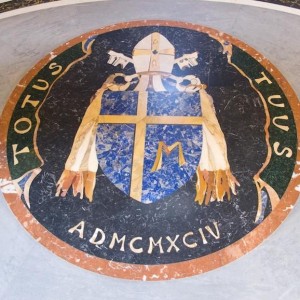