Sadly, it has become all too routine for me to look around at Mass (I attend a round parish, so it’s easy to see other people) and see no one singing. Even the Mass parts which are the same every weekend are barely sung. It does not matter if the hymns are traditional or contemporary; hardly anyone sings. In fact, sometimes, I feel like the only one singing.

1. The Church instructs the faithful to participate in the Mass

“Mother Church earnestly desires that all the faithful should be led to that fully conscious, and active participation in liturgical celebrations which is demanded by the very nature of the liturgy,” the Church declares in Sacrosanctum Concilium.

The Church desires for you (yes, YOU) to participate in the Mass. In participating in the Mass, we instructed to “not refuse to serve the People of God in gladness whenever they are asked to perform some particular service or function in the celebration” (General Instruction of the Roman Missal).

If called upon to sing, you ought to sing.

2. Participation in the Mass Is both internal and external

Some will argue that to participate all one needs to do is internally follow along and pray silently. However, active participation in the Mass is both internal and external. The Church talks about how both our bodies and souls are involved in the liturgy in Musicam Sacram.

“The faithful fulfill their liturgical role by making that full, conscious and active participation which is demanded by the nature of the liturgy itself and which is, by reason of baptism, the right and duty of the Christian people.

This participation should be above all internal, in the sense that by it the faithful join their mind to what they pronounce or hear, and cooperate with heavenly grace.

It must be, on the other hand, external also, that is, such as to show the internal participation by gestures and bodily attitudes, by the acclamations, responses and singing.”

Did you catch that last part? One part of externally participating in the Mass is singing.

3. The choir is not there to sing for you; they are meant to facilitate your singing

Mass is not a choir concert. The choir (or cantor) is not there for your entertainment or to take center stage. They are meant to lead the faithful in song, not sing for them. As the Church instructs in Musicam Sacram: “[The Choir’s] duty is. . . to encourage the active participation of the faithful in the singing.”

In fact, the same Church document states that the choir should be placed in the sanctuary in a place that makes it clear that they are a part of the congregation. The choir and the congregation are not separate entities. Together, they are charged with the laity’s duty to participate in the Mass.

The choir is not singing so you do not have to; they are singing to guide you in song. Sing with them.

As the Church says in Musicam Sacram, “One cannot find anything more religious and more joyful in sacred celebrations than a whole congregation expressing its faith and devotion in song. Therefore the active participation of the whole people, which is shown in singing, is to be carefully promoted.”

By joining in song, the parish community comes together and lifts their voices as one to the Lord. We are called to worship together. Actively participating in the music is one way to accomplish that.

5. Singing helps us express joy and love to the Lord

“Singing is the sign of the heart’s joy,” the Church declares in the General Instruction of the Roman Missal. “Thus Saint Augustine says rightly, ‘Singing is for one who loves,’ and there is also an ancient proverb: ‘Whoever sings well prays twice over.'”

Yes, stating that singing is praying twice is cheesy, but the Church felt it was a true enough statement to put it in the instructions for celebrating the Mass. Therefore, we cannot simply dismiss that idea; it must be applied to our prayer life.

6. Jesus sang at the first Mass 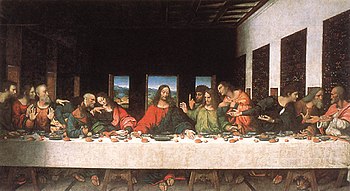 The Last Supper is considered to be the first Mass. Just before it concluded, Jesus and the Apostles sang a hymn before going out to the Garden of Gethsemane (Matthew 26:30).

Jesus sang, and are we not called to live like Him?

7. Your bad voice isn’t an excuse not to sing

Some people might feel self-conscious about singing at Mass if they are not gifted with a beautiful voice. However, you need to remember that your voice is the one God designed for you.

I once heard Matt Maher encourage people at his concert to sing loudly even if they did not have a good singing voice. “If you don’t have a beautiful singing voice, sing out anyway,” he said. “It’ll serve God right for giving it to you.”

At least pick up the dang hymnal and pretend!

Alex R. Hey has had his work featured on TheBatmanUniverse.net and in The Eagle Democrat of Warren, Arkansas and The Argus Leader of Sioux Falls, SD. His book, EugÃ¨ne de Mazenod: A Saint for Today, is available on Amazon.com, BarnesandNoble.com, and LeoninePublishers.com. He also has two collections of poetry available on Amazon. His imagination has always been over-active, and his love for story telling continues to bloom. In his early days of academia, no teachers ever told him he was a talented writer; they only gave him grades. However, in college a writing professor believed in him and helped him grow as a writer. This inspired him to pursue writing and now he writes full-time. Born in Maple Grove, MN, Hey has lived in Sioux Falls, SD since 1995. His interests include: Following hockey and Minnesota sports teams, Batman, detective stories, community theater, and improv. His favorite branch of theology is angelology.