Saint Gertrude the Great, Patron of the Dead

In the spirit (pun intended) of the season, is is appropriate to look at one of the patrons of the dead. Saint Gertrude was a powerhouse when it came to the faithfully departed. Read on to find out more about her and the powerful prayer she wrote to help those in purgatory! 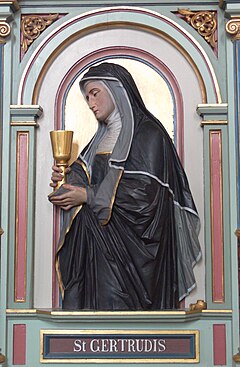 Gertrude of Helfta was born January 6, 1256 in Eisleben, Thuringia. When she was 5 years old, she was sent to the Cistercian monastic school in Saxony called Helfta. From that point forward, she would forever be associated with that name. Her study habits were second to none and she surpassed her fellow students quickly.

Since her time was devoted to study, Christ took a backseat to her efforts in education. She became proficient in philosophy, literature, singing, and miniature painting, but noticed that something was still missing. Soon, she fell deeply and madly in love with Christ and the idea of a life lived fully with and in Him. She made the decision to enter the novitiate and took the veil.

However, all was not roses. At about age 24, she was only living her life as a nun half-heartedly, easily distracted from where her attention should have been. A crisis developed within her being and overtook her. She was lost, lonely, and depressed. All of the plans she had made for herself began to crumble.

Early in 1281, she experienced Jesus through a youth who said to her, “I have come to comfort you and bring salvation.” She would later write of that day in reflection, “Jesus, my Redeemer, you have lowered my indomitable head to your gentle yoke, preparing for me the medicine suited to my weakness.” From that point forward, her life was lived in radical conformity and union with Christ.

Her studies shifted to only the study of Scripture, the writings of the Church Fathers, and theological works. She truly became a theologian via her new focus. As a result, she wished what she was learning to be shared with others. She began to write short treatises and works for her fellow sisters. These became spiritual treasures to those who were fortunate enough to read them. Many souls were edified by these works as a result. 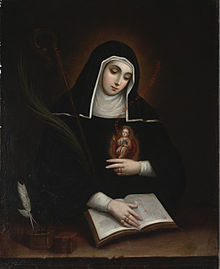 Gertrude experienced many mystical experiences where Jesus would reveal His infinite love and charge her to spread it among the faithful. He was especially adamant she spread His message to those suffering and for sinners. She would write these mystical experiences down to effect that end.

Her demeanor was always joyful and her countenance was always in a smile. She exuded humility and loved all she encountered. She was the attractant that led others to Jesus. Indeed, Christ said to her, “It would be good to make known to men and women how they would benefit from remembering that I, the Son of God and of the Blessed Virgin Mary, always stand before God for the salvation of the human race, and that should they commit some sin through their weakness, I offer my unblemished Heart to the Father for them.”

By 1298, her health was failing. She offered all of her sufferings in love and in unity with Christ’s sufferings for the edification and salvation of all souls. In recounting her conversion experience near her death, Gertrude relates, “Until the age of 25, I was a blind and insane woman… but you, Jesus, deigned to grant me the priceless familiarity of your friendship by opening to me in every way that most noble casket of your divinity, which is your divine Heart, and offering me in great abundance all your treasures contained in it.”

Finally sometime in late 1301 or early 1302, Gertrude succumbed to her infirmities. She would forever be joined to the eternal Bridegroom in ecstasy. She had a true devotion to the Sacred Heart of Jesus. Gertrude is the only female saint with the appellation “the Great”  in recognition of her theological insight and depth. Her feast day is November 16th.

As part of her experience and conversations with Jesus, Gertrude wrote the following prayer. It is said that each time the following prayer is devoutly said, 1000 souls will be released from purgatory. One thousand! Please pray this everyday, especially during this special month:

Eternal Father, I offer Thee the Most Precious Blood of Thy Divine Son, Jesus, in union with the masses said throughout the world today, for all the holy souls in purgatory, for sinners everywhere, for sinners in the universal church, those in my own home and within my family. Amen.